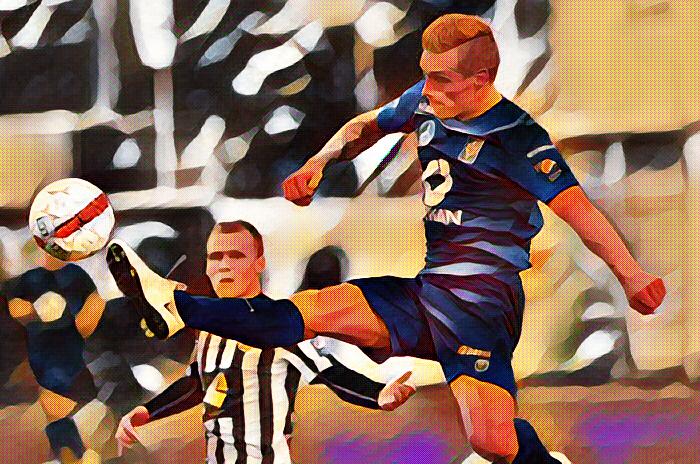 Now, you may or may not have heard that Kerala took the decision to get rid of Mark Sifneos, who is now at Goa, and replace him with Gudjon Baldvinsson, who is a completely unknown quantity in the ISL. Luckily, we have got Lucas Arnold on hand (@FRfotboltiLucas), who watched a lot Baldvinsson last season to give us the low-down on the Icelandic forward.

He made his debut on Saturday (27th of January) when he came off the bench against Delhi Dynamos; he had two shots, both of which were on target, won two free kicks and had a 75% success rate when it came to his passing. Not bad for someone who has just flown halfway across the world.

His tally for the last two league campaigns stands at 17 in 38, which is ever so slightly shy of one in two, but it goes to show that he’s thriving at Starjnan and if he can transfer his goalscoring ability from Iceland to India, then Hume will have some firm competition for the remainder of the season. Here is the list of clubs he has had played for so far:

You’ll notice that once he finds somewhere that he likes, he tends to pop up more than once, so if he’s a good fit for Kerala and vice versa, we may end up seeing a lot of him over the next few seasons. Anyway, enough about what little I know, let’s run through the Q&A Lucas and I ran through regarding Baldvinsson…

He has a great first touch

What qualities can Kerala fans expect from Gudjon?

“First of all, Gudjon is a goal scorer. He’s been prolific for Stjarnan over the years and has scored almost 1 in 2 in the league there. As far as the Pepsi-Deildin goes, the Icelandic top flight, I wouldn’t say there any better goal-scorers. And no better strikers for that matter, Gudjon can offer a whole lot more too, he has a great first touch and is used to playing in a team with Stjarnan that play fast, attacking and flowing football. He’s not a target man but he does have the qualities to encourage one-touch play around him.”

He reminds me of Defoe

Sounds like a right handful. Who would he compare to in the English Premier League?

“If I was pushed to compare him to an EPL player, I honestly see a lot of similarities to Jermaine Defoe. Gudjon is an instinctive finisher, often first time, and that’s where a lot of his goals goal from – catching the keeper off guard, and he reminds me of Defoe in that. One of Gudjon’s key attributes is his pivot, he turns extremely quickly with the ball and often can catch people out around him. Is he getting better with age? Quite possibly, maybe he shares that with Defoe too, both like a fine wine.”

Very interesting; if he’s half the player that Defoe is, he’ll be a fantastic signing. Will he suit the ISL?

“It’s hard for me to say, having not watched the ISL but I’m confident his qualities will shine through.”

To be fair, that was a stupid question and one I should’ve known the answer to, never mind. Let’s hope we have more luck with this one… Why has he chosen India?

“Right now the Icelandic season hasn’t started, it doesn’t until May, so this is a great opportunity for him to play football and it definitely looks like a really exciting challenge at this stage of his career. He seems extremely motivated to do well there and I wouldn’t expect any different from what I’ve seen. It’s got to be a lot of fun being around the likes of Herman (Hriedarsson), Dimitar (Berbatov), Wes (Brown) and David (James) too. I’m sure he has some friendships there. It seems like a great fit and I really hope he can show how good he is there (and then return to Iceland and do the same!).”

A move like this for Gudjon could be the norm

“Icelandic football is only getting better and better, the outstanding achievements of the National team looks like it’s being replicated in the domestic league and a move like this for Gudjon could be the norm as players seek to play more football in the extended offseason. Birkir Mar Saeversson, an Icelandic international has recently signed for Icelandic champions Valur and he was linked with a loan move to England, in a similar time frame to this one, before he got injured. The Pepsi-Deildin has a lot to offer.”

There you have it. Baldvinsson sounds like a right catch for David James & Co and with their next game being away at Pune, they need all the help they can if they’re going to make the coveted top four places.

All things considered, if I was a betting man and luckily I am, I’d be backing Baldvinsson to finish the season on more goals than Sifneos, who’s on four at the time of writing.