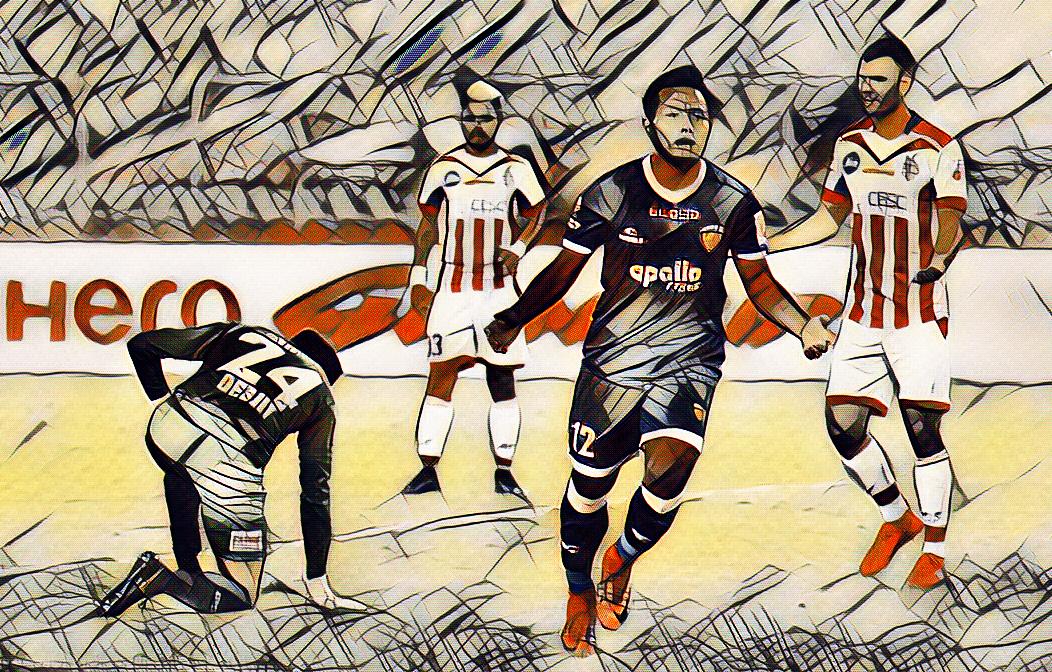 Ashley Westwood probably thought he had turned a corner when his ATK side started the second half one goal to the good. It has been no secret that he and Sheringham didn’t particularly see eye to eye and considering the ex-Spurs striker’s departure hasn’t been given the courtesy of a mention on ATK’ s social media accounts or their website, it’s probably safe to assume the break-up was messy as well. Westwood came across as a hyped up personal trainer on the sidelines as opposed to a football coach, but, his success at Bengaluru can’t go ignored, that’s enough about him, though, let’s focus on events on the pitch.

Both teams came into the match on the back of defeats where they’d shipped three goals each, so it was time to right some wrongs for the pair of them. Chennai’s loss at NorthEast was a great surprise, but Gregory made sure there would be no repeat performance against ATK. Nonetheless, a half which was mainly filled with half-chances and long ranged attempts on goal, ATK went into the interval 1-0 up after some instinctive play from former Burnley man Paterson saw him get the rub of the green and a goal on his debut. A fantastic whipped delivery from Rane coupled with some intelligent movement from Paterson meant that he won the ball in the air, however, it was straight at Karanjit; the header was too hot to handle though as the save ended up hitting Paterson in the chest and he couldn’t miss, he was literally on the goal line. That was the only chance of note as it was the home side in the ascendancy when the referee blew for halftime.

Just before Paterson’s goal, Ryan Taylor went off injured and I’m aware I say this quite a lot, but he is an integral part of the ATK side and when he isn’t playing, seldom do they click. In the half he played, they had seven shots, three on target, in the one he didn’t, they had three shots with none on target. Taylor was deployed in a role where he would stifle Raphael Augusto and he did that in the first half. In the second half, Raphael had much more room and was a constant nuisance and that isn’t a coincidence. The first real attempt of the second half was from the aforementioned Raphael as Majumder had to be alert to tip it over, on the contrary, the ATK keeper should have done much better with what was to follow.

Another goal, another fantastic delivery. Thapa was the one with the delivery this time around as his corner was met by Mailson who lost Paterson in the box and headed home. Majumder would’ve been disappointed with the goal because it went underneath him and it was also right at him, thereabouts anyway. When things like this happen, the key is to respond it. The issue was that ATK didn’t, granted, they had a small spell with the ball, but they didn’t do anything that would have worried John Gregory’s side.

Jeje’s Takes His Tally To Seven

Once Chennaiyin had got the ball back and were back into their rhythm, it didn’t take them long to take the lead and it will come as no surprise to anyone who the goalscorer was. Augusto was again the source of the attack as he was pulling ATK’s Taylorless midfield all over the place. The ball found itself on the right-hand side at the feet of Inigo Calderon who tried to put a ball into the area, but, a deflection which looked suspiciously like handball, took the ball towards Majumder and that should have been that. Well, it should have been. The keeper couldn’t keep hold of the ball, it hit Jeje and it was 2-1, the goal took Jeje to seven for the season, his first in three games.

Chennai could smell ATK blood now and they were on the hunt for more goals. Raphael was again the lynchpin of the attack as he and Jeje were toying with their defence; Raphael timed his pass to perfection which left Jeje with just the keeper to beat. Rather uncharacteristically, Jeje hit at straight at Majumder, the chance was not completely lost though as the ball came back to him and instead of having another go himself, he gave it back to Augusto. He couldn’t finish either, BIG chance squandered.

That was your lot though as Chennai saw the game out with relative ease and moved back to the top of the table, displacing Pune. ATK’s slim hopes of defending their title are fading away by the game as they’re now seven points off the playoffs with only seven games remaining. Westwood has certainly got his work cut out from now until the end of the season.