Mumbai City FC lifted their first-ever ISL trophy after Bipin Singh’s last-minute shocker earned them a 2-1 victory over ATK Mohun Bagan in the finale of the Indian Super League on Saturday. Mumbai have also become the 2nd side in ISL history to top the league table and then go on to win the ISL title. 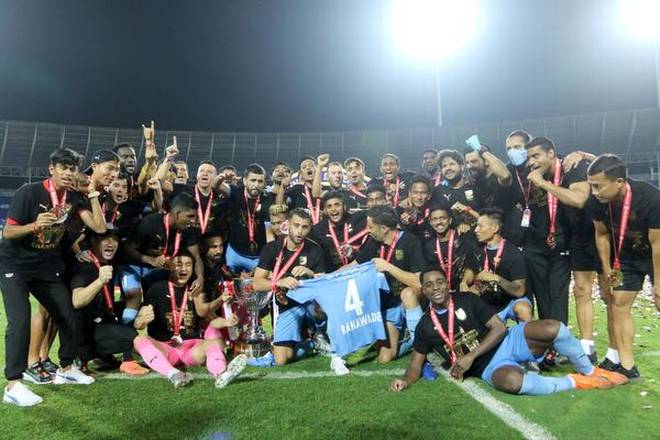 David Williams initially scored the opening goal making it 1-0 to Mohun Bagan early on in the match. However, Mumbai managed to get level minutes later, thanks to an own goal in the 29th-minute by Jose Luis Espinosa Arroyo.

The match also witnessed a horrible injury for Amey Ranwarde, who was taken off to hospital after colliding with Subhasish Bose in injury time of the first half. The player is said to be in a stable condition as per the latest reports.

With Mohun Bagan setting up in a 3-5-2 formation and Mumbai opting for a 4-2-3-1, there was little doubt on how both teams would attempt to dictate the play.  They pressed early on creating half chances until the first breakthrough of the game arrived in the 18th minute in favour of Bagan. A total blunder by the Mumbai defence that fell apart under the pressure from Bagan gifted the first goal of the game.

Roy Krishna dispossessed Jahouh on the wing and Williams got to the loose ball before smashing it past Amrinder Singh to make it 1-0. At the other end, a clear penalty call from Mumbai was not awarded by the referee despite huge protests from the Mumbai dugout. MCFC however continued to dominate possession with their short passing game through-out the first half.

For Bagan, the early lead was soon gifted away by their defender Tiri in the 29th minute. Ahmed Jahouh’s long ball into the box was misread by Tiri, whose clearance ended up in the empty net.  Adam Le Fondre threatened the Bagan defence with brilliant balls into the mix for Mumbai. Unfortunately for Mumbai in injury time, Amey Ranawade went down after colliding with ATKMB’s Manvir Singh and was taken off immediately in an ambulance.

The second half started in favour of ATKMB with Roy Krishna creating the first early chance of the half. Lenny Rodrigues’s shot was also blocked early on for Bagan. Hugo Boumous, on the other hand, missed a golden opportunity to put his team ahead in the 58th minute after a deflected shot landed perfectly in favour of him. However he smashed it over the bar.

Javier Hernandez also went closer in the second half, with one shot hitting the crossbar in the 72nd minute. The game continued to be evenly balanced until Bipin Singh managed to find the all important goal for Mumbai in the 90th minute. Arindam’s poor handling of the ball gave Obeche enough time to find Bipin, who slotted home the winner for Mumbai.

For ATKMB boss Antonio Habas, it was his first defeat in three finals and the second defeat this season against the same Mumbai side.

I am a postgraduate in journalism who happened to have a passion for writing. I worked for print and TV Journalism and currently doing freelance jobs. For me, football is a fresh breath of air and possibly be the only reason I looked forward to every weekend. What I do love most about football is the incalculable nature of the game as a whole.