Inigo Calderon plays in India now. Did you know that? He doesn’t just play though, he is absolutely immense and was part of the Chennaiyin side that defied the odds and beat Bengaluru in the ISL final. He has made that right side his own and has often appeared on the pitch it places he frankly has no right being considering he’s a right-back.

Calderon’s Decision Was More Than Ratified

However, one of the reasons why he can do this is because he has an engine on him like no other and it’s of little surprise that he won the ‘fittest player of the year award’, yes that’s what it was really called.

His decision to link-up with John Gregory in Chennai was not only ratified with the fact that they won the title, it was also ratified because he got back to playing some of his better football, which we last saw at his time in Brighton. Despite Sergio Juste winning the defender of the season as voted by the fans on social media and Mailson Alves coming second, Calderon wins my own personal one by a country mile. It’s also things like this that make me know I’ve made the right call…

“I had to wait thirty-six years to win something. So, it was worth it.”

Inigo must’ve forgotten that he was part of the Brighton side that won League One in 2011, but never mind, maybe he means a top-flight title. What I am going to do is run through his stats in a similar way that I did with Jahouh last Friday, we’ll change it up from the last piece though and look at his heatmap, to begin with: 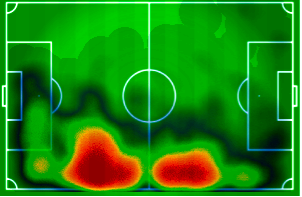 As you can see, the Spaniard covered practically every blade of grass throughout the course of the season, we can probably excuse him the little bit on the left-hand side of the pitch as that’s not really his prerogative. It’s difficult for me to really explain how good he was, so let’s take look at some numbers which will hopefully shed a little more light.

We’ll go from left to right; the fact that he played every minute of every game bar the one when Gregory rested every man and his dog speaks dividends on its own and we could just leave the article here just based on that. I like to be thorough, though! Next up, is the defensive duels, of which he averaged just over six a game.

Look Beyond The Numbers

It also says that he only won 24.4% of those, which is utter bollocks. After watching some of the duels ‘he lost’ it seems that it counts as a loss if he doesn’t touch the ball, so in some instances where he ushers the attacker backs towards his own goal, that counts as a loss which seems ridiculous, but such is the way the world works.

Aerial duels are something I’m going to cover shortly, so we’ll brush over that one. Slide tackles are similar to defensive duels in how they seemingly decide what is right and wrong so it’s safe to say the success rate is higher than 50%. Interceptions wise, 116 for the season meant he finished fifth in the interception table.

I love a good interception as much as I do a thunderous slide tackle at times because an interception shows excellent reading of the game and with three of the top five being Spaniards, I think that tells you something about how Spanish footballers are developed.

I’m going to casually ignore the next two as they don’t make any sense whatsoever to me and the percentages seem wrong again, we’ll revisit this one day when I understand it all. Could do with a glossary of some sort. Only two shots blocked by Calderon this season, albeit, that’s more to do with Chennaiyin’s defensive shape and structure rather than Calderon’s lack of desire to throw himself in front of the ball.

His Body Was On The Line On More Than One Occasion

Clearances show the blocked shots thing is a myth anyway due to clearances counting for goal-line clearances as well and considering there’s an average of over three a game, it shows he’s always amongst the action. Less than a foul a game is excellent as his disciplinary record, Calderon only picked up three yellows all season which is good going.

That’s the stats done for you, now it’s that time of day where we take a look at some pictures and I’ve jazzed them up with circles and arrows. It’s much fun. Here’s the first.

Calderon at his best.

As the caption says, this is Calderon at his very best. The attacker has used his right foot for every single touch of the ball as he was going to towards Inigo so instead of diving in which is what a lot of would’ve done, he just showed him the line. It is something that you’re shown how to do from a young age, nevertheless to see it done on such a big stage with such expertise, it’s so refreshing. In the end, the attacker went back on himself and Chennai ended up winning the ball in a different phase of the game. Ten points to Calderon.

This next one is two-parts and it does also mark the end of the article, but I think it does Inigo justice enough. Here is picture #1:

Note, the red line is the direction the ball travels in. Well, sort of, I’m not the most artistic of people. What you need to know is the ball ends up about two yards out from goal, Calderon is in white, John Johnson is in blue. Also, make a note of the clock. There are just over sixteen minutes left in the ISL final and if Johnson scores this, it sets up a grandstand finale…

HOW HAS HE GOT TO THAT?

If you look closely, the little black circle is Calderon. Somehow, he got to the ball before Johnson. I’ve watched it back several times over and I still have zero idea how he managed to get there first. Johnson had the better position. If that was any other Chennaiyin player, I can say with confidence that, that would’ve gone in and maybe Bengaluru would’ve pulled it back.

The red arrow shows where the ball ended up going as Calderon’s deft flick kept them two goals to the good. Now, I’ve watched football for a number of years and probably watched in excess of tens of thousands of bits of footage, but that from Calderon was the best piece of defending I have ever seen and I don’t say that lightly. If you can remember, think of Seaman’s save for Arsenal in the FA Cup versus Sheffield United, it was the defensive equivalent of that.

So, there we go. Inigo Calderon, please stay for another season as you were a joy to have in the ISL, you’ve set the bar incredibly high and dispelled the myth that some players just come here for a payday and a chance of scenery.