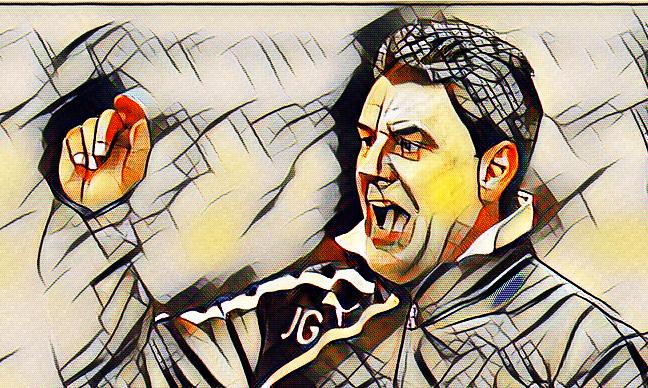 From the South Coast of England to the South East Coast of India via Israel and Kazakhstan amongst other places; ladies and gentlemen, I give you Chennaiyin manager, John Gregory. I’ll admit, when I found out JG (I’m calling him that, deal with it) was working in India it came as a bit of a shock to me as I actually thought he had fallen off the face of the earth.

My last memory of him was at Crawley where he stepped down to have open heart surgery, then he was replaced in the interim by Dean Saunders. I’m not going to talk about Dean Saunders too much as I think my blood pressure will go through the roof. Anyway, back to JG; what we are going to do here, is look in segments at where his managerial path has taken him. It all begins back in the late 1980’s…

It all started at Fratton Park with Portsmouth in the old division two (Championship to you and me) in January 1989 where he replaced Alan Ball as manager and he got off to a winning start in his life as a gaffer as they dispatched Shrewsbury 2-0 at Fratton Park in his opening game. After that game, he would only win two more matches and Portsmouth ended up losing their last six games of the season, but somehow, they survived.

JG was sacked on the 3rd of January 1990 after one win in eight, happy new year John! He wasn’t out of work long though, as Plymouth came knocking as they saw what he did at Portsmouth last season and they need some similar Houdini magic. Could he do it again? Of course he could. Only, just, mind. With seven games left it wasn’t looking too good for the Home Park side but then out of absolutely nowhere, JG got four wins from the last seven and in the end kept them up by eight points. Not too bad at all.

The gig at Plymouth was only ever planned to be a short-term thing so at the end of the season they parted ways and JG was on the look for another way into football. He decided to play for a bit after that on a non-contract basis for Bolton and then got back into coaching with Brian Little where he worked with him at Leicester and then Aston Villa which takes this story up until 1996.

Off he went this time to Adams Park and to Wycombe, where it was a similar situation to the two previous, operation stop relegation. This time around he was given more time as he took over in October, it took him a little bit longer than normal to get going but again, he managed to do the unthinkable and keep a doomed side up. Making quite the name for himself, was JG. In a somewhat surprising move, one of his former clubs, Aston Villa came calling for him in the latter stages of the 97/98 campaign.

So off he trotted up north to Birmingham where he would look to improve Villa’s fortunes for the rest of the season. He announced himself to the Villa Park faithful with a 2-1 win at home to Liverpool and then followed that up in the Premiership with a 1-0 win away at Stamford Bridge. Out of the thirty-three points that were available to John Gregory’s Aston Villa, they picked up 27 which is nothing short of astounding as they snuck into the UEFA cup places.

The following season saw Villa fans dare to dream as with a significant chunk of the season played they were sitting pretty at the top the table, but, much like the Villa of today, they bottled it as they fell down the table ending the campaign in sixth and outside the European places. Shame. I’ll be honest I don’t like Villa so I’m not particularly enjoying this bit about them doing well in the top flight, so I think we’ll skip the rest of his Villa career. The only bits we’ll mention is they got to the last FA Cup final at Wembley and choked (again) and Gregory quit Villa Park in the January of 2002.

He wasn’t out of a job for long, less than a week in fact, before he resurfaced at Derby County. Again, much like the jobs he was tasked with before, with the exception of the Villa job, he had to try and save Derby from relegation. Six games in, it didn’t look impossible after he won three of them meaning it was a possibility, albeit a slim one but there was still 24 points to play for so anything could happen. From the final eight games, he got one point. The wizard had seemingly lost his Midas touch as they dropped points all over the place and they were relegated to division one (Championship).

The following season didn’t end well for JG, to put it mildly. He was sacked for gross misconduct in March 2003 which also followed a run of nine games without a win; this set Gregory back a bit as whilst he was contesting his firing for misconduct, he was not allowed to manage another club. He eventually won his dispute with Derby and they had to pay him a tidy seven figures for his troubles as well. Well played JG, well played indeed.

The misconduct was finally all resolved and he was allowed to manage again and it was Loftus Road club QPR who required JG’s help after their start to the season had left them firmly rooted to the foot of the Championship table. As what was becoming the norm with JG’s managerial career, he won the first two game as the QPR gaffer and kept them up. The wizard was back! It was rumoured after he kept QPR up that he was being drafted for a role in Harry Potter but nothing ever materialised; the main reason for that is that I just made it up.

Second season syndrome slapped JG around the face yet again, though as he was sacked after an abysmal start to the following campaign. So, he had managed on the south coast, the West Midlands, London, Buckinghamshire (I think that’s where Wycombe is) and the East Midlands. So you think he would go north after that wouldn’t you? Try and get the set? Wrong. Oh so very wrong. Israel was the next location, three years after being sacked at QPR.

Quite how you go from those previous teams to Israel is anyone’s guess and believe me, I’ve tried to find out why he would have gone there, but all I can find is a comment from a press conference where he says something along the lines of “I’m happy to be here”. Yeah, I understand you’re happy to be there John, but why are you there?! He was tasked with the usual business of keeping a team in their respective decision, this time it was Maccabi Ahi Nazareth.

Normally, as we’ve come to find out through this, JG does quite well at the start and then gets worse, but how would his debut away from England pan out? Well, he didn’t win until his seventh attempt which is hardly the ideal start, especially when your back is already firmly up against the wall. They ended up in the relegation part of the Ligat ha’Al and finished bottom, had JG lost his magic? Well, we had a chance to find out soon enough as he went straight to Ashdod from Maccabi and Ashdod were a different prospect completely as he was aiming for Europe, as opposed to survival.

He signed a three-year deal with Ashdod so it was time for JG to reinvent himself as an English manager who succeeded abroad much like Roy Hodgson and Sir Bobby Robson before him. Then who knows what would be after that, the sky really would be the limit. As the story goes, it wasn’t quite the fairytale he had perhaps hoped for as he once again ended up in the relegation half of Ligat ha’Al and finished 13th out of 16 teams with an Ashdod side that was meant to be full of promise.

So, less than twelve months into his three-year deal, JG quit. After that, again for some unknown reason, he popped to Kazakhstan where he had a six-month fling managing Kairat Almaty, that didn’t go too well either so we’ll gloss over that bit as well. That brings us to December 2011, so we’ve still got to find seven years from somewhere. Bloody hell.

What makes that a little bit easier is the fact that he didn’t really do anything managerial wise for a couple of years until he took over Sussex side Crawley Town in December 2013. He did ok there for the year he was in charge there until he had to step down due to the slight inconvenience that he was going to have open heart surgery. I went to Crawley away once and they had run out of chips by the time I got to the front of the queue, so I’m not their biggest fan.

So, there we have it. JG has been all over the place and apart from working his magic to keep a few teams up, he’s been relatively unsuccessful, however, they could all be set to change now he is at Chennaiyin. They’ve started well and are on six out of nine points ahead of their clash with ATK, later on today, so if they win that, they will go top of the league. After nearly thirty years of management, JG has probably earned a trophy by now, so maybe he will be in luck this time around.

All things considered, if I was a betting man and luckily I am, I would be backing John Gregory to be managing some obscure English team come the start of the 19/20 season. I’ll stick my neck on the line and say, Morecambe.