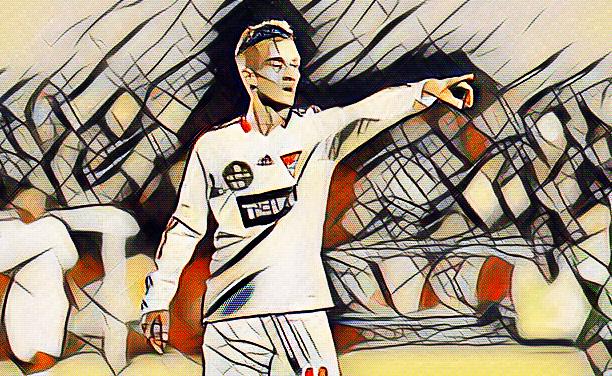 ‘You are my Rene, my Rene Mihelic, you make me happy when skies are grey, you’re so much better than Manuele Blasi, so please don’t take my Rene away’ is the song that rings out whenever Mihelic steps onto the pitch as the Chennaiyin supporters compare him to Blasi who departed earlier this year. Now, that song may not have been sung and I may or may not have just made it up. Either way, it should be happening as Mihelic is a player who does a lot of things on the pitch that doesn’t really get appreciated.

Think of someone like Claude Makelele, who was an integral part of Chelsea winning their first title in a million years or whatever it was, back in 04/05. He didn’t get a great deal of attention because he’s not the one chipping in with goals, but without him, that Chelsea team wouldn’t have got anywhere near the top two, let alone win the title. There is a slight difference in terms of positions when it comes to Makelele and Mihelic as Mihelic plays in a more advanced role and probably should be chipping in with goals, but he’s important, nevertheless.

To begin with, I’m gonna hit you with some stats that show what sort of calibre of player we are dealing with. Mihelic has played internationally for Slovenia and every time he has played, they’ve not lost which is rather impressive, don’t you think? Well it is, but I suppose it must be given some context as he’s only been on the pitch for a grand total of twenty-seven minutes across his international career, however, that is spread across three games, so its a claim to fame for Mihelic.

Alongside his acclaim on the international scene, his European exploits can’t be ignored, either. He’s played in the Intertoto Cup (remember that?), the UEFA Cup (the good old days), the Europa League and the Champions League. Now this isn’t anything like his international career which let’s face it, isn’t much of a career at all; he actually did quite well on the European front and in those competitions I mentioned, he’s actually scored in all of them as well.

Might end up being an answer in a pub quiz somewhere along the line. What is the name of the Slovenian who has scored in the Intertoto Cup, UEFA Cup, Europa League and Champions League? Rene Mihelic. If there’s another one, I’ll eat my hat.

He’s played in Europe for Maribor, Nacional and Debrecen, not blockbuster names by any stretch of the imagination, but still, an impressive feather to have in your cap for someone who is now turning out in the ISL. Before I take you through a brief run of what teams he has played for, first we’ll take a look at the countries he has played in.

Now, I am not one to speculate (that’s a lie), but we have to be asking ourselves why does he leave every country after only playing for one team? Is it possible he could be working for SOVA, who are the Slovenian Intelligence Service? I’m not ruling anything out, so we’ll mark that down as a maybe.

Mihelic came through the youth system at Maribor and spent five relatively successful years there, winning the aforementioned Intertoto Cup in 2006, the domestic title in the 08/09 season and the Slovenian Super Cup the following year. It was also whilst he was at Maribor where he made his bow on the international stage; when he made his debut he became Slovenia’s youngest ever player, a record that is still intact to this day. He ended up playing over 150 times for Maribor before Nacional of Portugal came knocking and stumped up £810,000 for him.

His time in Portugal wouldn’t have been successful as he would like as he would only score once and then he got shipped out on loan to Levski Sofia, which I actually think is a step up? Not much really went on there, either, as he played twelve times, got booked twice and got sent off. Not a lot to write home about. A few months after his loan spell finished in Bulgaria he left Nacional on a free transfer and moved back to his homeland where he signed for DNS Zavrc. Yeah, I’ve not got a clue.

Rene Mihelic’s career so far in numbers (all according to transfermarkt; excluding Chennaiyin and the random Swedish team he played once for )

He obviously did something right at Zavrc as he was only there for a few months before Debrecen came calling and his European adventure was now taking him to Debrecen in Hungary. Now, I’m not a contract expert, but I know a dodgy situation when I see one after the amount of time I’ve binged on Football Manager. As mentioned, he joined Zavrc in October 2013, nothing too untoward with that, but then, he joined Debrecen in January 2014 on a free transfer according to Transfermarkt. Now, I’ve never, ever heard of a player signing a three-month contract in football, yet that is seemingly what Mihelic did. The alternative? It all points to SOVA again.

Whilst Rene was in Hungary playing for Debrecen, that is where he picked up his most recent bit of silverware as they won the league on goal difference. The team they beat by the finest of margins was FC Gyor and it was their home game against them where Mihelic proved his worth as he scored one and set the other up, both from set pieces.

The simple way of looking at it is, without Mihelic, they wouldn’t have won the league and since he has left Hungary, they have failed to win it since. After his endeavours in Hungary, he was off on his jollies once again, this time to Ra’anana where he tried to help Hapoel break into the Europa League or even better, the Champions League.

His time at Ra’anana which I’m hoping is Hebrew for banana, started in the best possible way as he scored on his debut, admittedly they lost, but he got himself known to the crowd early doors and hopefully, he would kick on from there. Wrong. Not much happened in his next few games and nine games had passed before he got himself on the score-sheet again, however, there was a slight twist with this goal as he also got sent off later in the game. Not good.

All in all, the 15/16 season was ok as they ended up in the Championship part of the division (think Scottish Premier League), but they didn’t really do to much damage in that part of the competition as they finished the season with a bit of a whimper.

The less said about the following campaign, the better. He left them in February of this year and it didn’t take long before he was snapped up again, this time, he was off to Riga where he stayed for eight games before deciding to join John Gregory in India at Chennaiyin. Now, John Gregory said he had been watching Mihelic since his time in Israel which I do find hard to believe, but that is a story for another day.

His time with Chennaiyin hasn’t started too well as he started the opening game but got taken off at halftime as they were 3-0 down and a formation change was required. The game finished 2-3, so without him on the pitch they were much better if you look at the scoreline in isolation. Since then, they’ve played two and won two with Mihelic watching on from the substitutes bench. Tonight, they face ATK, so hopefully, our new favourite Slovenian will get a look in.

All things considered, if I was a betting man and luckily I am, I’d be backing Mihelic to chip in with at least three assists this season and probably get sent off at some point.