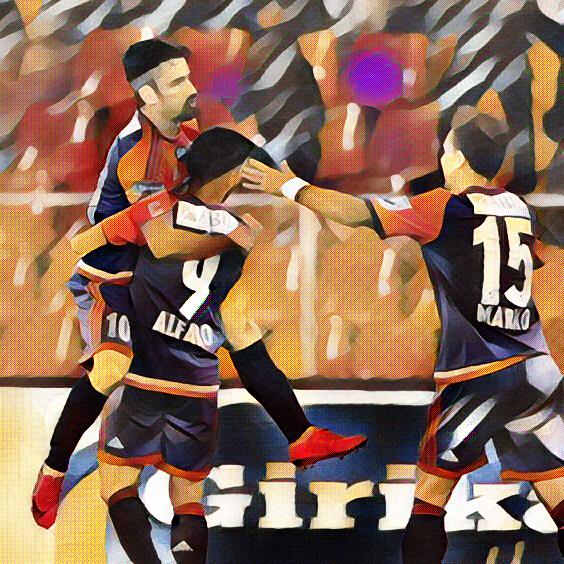 A Marcelinho inspired Pune City leapfrogged Chennaiyin and Bengaluru to go top of the ISL after a hard-fought win over Steve Coppell’s Jamshedpur. The ‘Men of Steel’ had won two on the bounce prior to facing Pune and it looked like it was going to go the way of Jamshedpur again as another goal from Wellington Priori meant that at the interval, Jamshedpur were one to the good. However, Popovic, who was finally allowed back in the dugout, made a double substitution at halftime and once they got the equaliser through Gurtej, there was only ever going to be one winner. Four minutes later, Alfaro completed the turnaround and they got the three-point; that’s the condensed version.

This is the not so condensed version… Pune started the quicker of the two as they kicked from left to right in the first half; Diego have a crossed palmed out by Subrata and Adil Khan of all people was in the right place at the right time, however, his shot was high as opposed to accurate and Jamshedpur lived to fight another day. It was the away side’s turn to have a sight of goal just before the half-hour mark, though and unlike Adil Khan, Wellington Priori made this count. He got a heavy slice of luck pie as the ball bounced kindly off Kaith in the home goal, but he still had to put it away into the unattended the goal and he managed to do just that as Jamshedpur went 1-0 up.

How on earth has he missed that?

It could have and perhaps should have been two-nil not too soon afterwards after some good work down the left from Azuka saw the ball flash across the face of goal, but, fortunately for Pune, there was nobody there to get on the end of it. Then, something ridiculous happened. For once, I’m not going to harp on about a refereeing mistake, instead I’m going to go on about a horrendous piece of finishing coupled with a heroic piece of defending. Not too dissimilar to Priori’s goal, Marcelinho got the luck of the bounce from the keeper and the goal was gaping; the ball had ricocheted to the normally reliable Alfaro who had all the time in the world to place it. He could have passed it if he really wanted to, but instead of doing either of those, he hit at the defender on the line and just like that, it was halftime.

Pune had a lot more of the ball in both halves, but it was the half after the interval where they really made their possession count. The highly-likeable Popovic was back in the dugout for the first time in what seems like an eternity and he was his usual, eccentric self on the sideline as he roared his team on. They were knocking on the door from the outset in the second half as Marcelinho had a shot saved, but, then, they finally breached Jamshedpur’s resilience. Marcelinho swung a corner in and again, without Bikey in the side, they were sloppy at the back, Gurtej was unmarked and make it 1-1. It was arguably the weirdest headed goal I’ve ever seen as he headed it into the floor and it bounced over Subrata in what must’ve been slow motion. Jamshedpur would have been disappointed to concede like that though, Gurtej had far too much room.

The ‘Men of Steel’ were still reeling from Gurtej’s equaliser when Pune turned the game on its head only four minutes later. Alfaro played the ball out to Marcelinho on the left who drove forward aggressively to the byline, pulled it back to Alfaro who smashed it home. It was deadly. Pace, power and most importantly precision made this goal happen and it had been coming. 2-1, but there was still over twenty minutes left. Pune should have got the third after an incisive breakaway saw Diego play in Marcelinho, but instead of capping a marvellous display with a goal, he hit it straight at Subrata.

It was Marcelinho again causing havoc as he ran and ran and ran before cutting it back to Stankovic who had the chance to open his account for Pune, however, Subrata was in the way again as he kept Jamshedpur in the game. In stoppage time, we almost had the late drama that every football fan lives for but Tiri’s header was cleared off the line by that man Adil Khan who seems to get absolutely everywhere. Subrata went up for the corner after that, but it wasn’t meant to be and the ref blew the final whistle.

Pune would have bitterly disappointed if they hadn’t of come away with all three points and they very nearly didn’t, if Tiri’s header goes in, Popovic would have gone radio rental. There are no two ways about it. Subrata did all he could, he made five second-half saves to keep Jamshedpur in the game, but, deep down he will know he could have done better with their first, such is life. The mistake for me was leaving BIkey out as I think him and Tiri have got a solid partnership and although Anas is a very good player, he and Tiri don’t seem to click in the same way.

A thoroughly enjoyable encounter, let’s hope for more of the same!