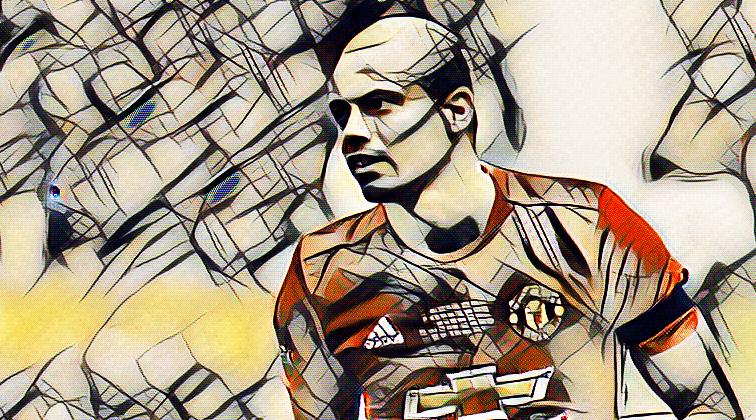 “He’s big, he’s bad, he’s Wesley Brown…” was how the terrace chant started when he played in England for Manchester United and Sunderland, but, who exactly is Wesley (Wes for short, I’m calling him that from now on) Brown? And why is he big and bad?

Brown, who has played nearly all of his footballing life at centre back, started his football career at the most successful side in England, Manchester United. He came through the famous United academy and won countless honours with the Old Trafford side, most notably, he was part of the famous treble winning side of the 98/99 season. I know what you’re thinking and yes, it was THAT final.

He was heading for big things after that season, destined to undoubtedly be the stalwart of United and England’s defence for years to come, however, disaster struck and he was ruled out of the 99/00 season with a knee injury, what a wounder. You must give credit where credit is due though, he came back stronger, fitter and more agile the following season and went on to play 41 games for the Red Devils.

That figure of 41 would end up being the most amount of games he played in a season for the next several years as he would have more injuries than you could shake a stick at. Again, though, through his sheer love of the game and determination to play, he bounced back once again, better than before. This time, he was utilised away from his favoured position of centre-half and was put in place as United’s first choice right back for the successful 07/08 season which saw United do the double and saw Brown play a career high of 52 games, he also got on the scoresheet for the first time in what seemed like ages in a 3-0 win over Liverpool.

Guess what happened after he had a good season? I’ll give you one guess and one guess only. Yep, you’ve got it. He got injured. Again. This time around it wasn’t as easy as it had been before for Brown to get back into the side with the likes of Nemanja Vidić and Rio Ferdinand in front of him at centre back and with Luis Antonio Valencia brought in for the right back position, Brown’s opportunities really were few and far between.

The summer of 2011 arrived and Brown was fed up with being a bit part player, so he decided to depart the North West of England after fifteen years to embark on a new adventure. Obviously, Brown’s biggest objective was to be playing first-team football as regularly as possible and for that to happen, he opted to move to Wearside and join Sunderland.

It all started rather well at the Stadium of Light for Brown, he won the Man Of The Match award on his debut and he was part of a Sunderland team that was solid without making any massive waves for the first half of the season, then something happened to him. Surely not, you’re asking yourself? Surely he can’t have got injured AGAIN? Yeah, he did. The injury hoodoo got him once more. It took TEN months for him to get back to full fitness. To be fair to him, he then had a sturdy seventeen months of football which was unheard of, then, return of the hoodoo. Injured, again.

He signed an extension with Sunderland which would see him stop with the Black Cats for another 12 months, taking him to the end of the 15/16 season. After looking at the stats, I’ve no idea why Dick Advocaat convinced him to sign a new contract because he barely featured at all and for once, it had little to do with injury. Then again, the one game he did start in the early part of the season, they did ship six away at Everton; he only went on to play five more league games in that season meaning that for only the second time in his career, it was time for Wes to look somewhere else.

The summer, as you would have come to expect, was full of injuries for Brown, however, it all came right once again when he signed a short-term deal with Championship side Blackburn Rovers. Well, when I say right, I mean he was signed to a club. Not in terms of anything else. He would have, no doubt, been frustrated with his spell at Ewood Park as he watched from nearly all the season from the bench as Blackburn were relegated to the third tier of English football. The less said about that, the better.

Internationally, there isn’t a great deal to shout about, he was in and around the England squad for quite a number of years without ever really making the first team, Capello’s reign aside.

In summary, I have no idea why he’s big or bad but what I do know is Kerala have a player who has won everything possible in the English game and he is also a player that Sir Alex Ferguson called the “best natural defender in the country”. Moving that to one side though, if I was a betting man, which luckily I am, I’d be backing Brown to get injured at some point this season.