Matchday 2 of the Hero ISL certainly mixed things up a little bit. As we said in #1 of our “5 things learned” piece yesterday, forget everything you thought you knew as a result of matchday 1!

Once again we turn to some statistics via Wyscout’s Power Rankings to see if we can add a little context to the weekend’s action.

Possession does not always = GOALS 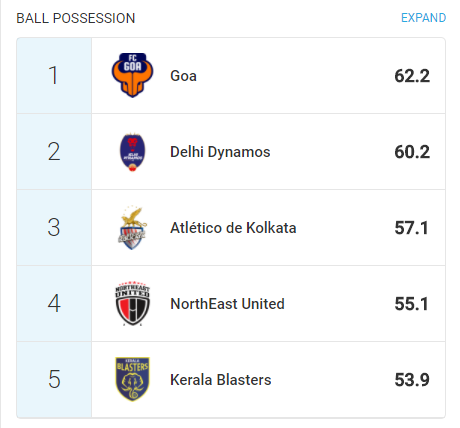 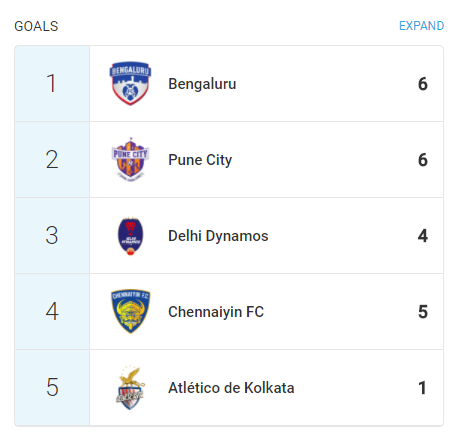 The common school of thought is that you have more of a chance of scoring when you have possession of the ball. That kind of makes sense, though the statistics above do not appear to bear fruit so far. FC Goa (one win, one loss) have had 62% possession so far yet have only scored four goals (for some reason not shown in Wyscout’s PR above). Dehli Dynamos also average above 60% and have scored four in two games – this would normally feel quite good but once more, they have won and lost. Look at ATK – 57% and only one single goal. NorthEast United and Kerala – well done for passing, but it has not led to a single goal for either side yet. The ISL top scorers are Bengaluru FC and FC Pune City – 6 goals each and look at their possession average below.

Both sides have allowed their opponent to have the ball in both their games so far – granted, this worked much better for Pune in their second match against ATK than it did in their opener against Dehli, but this is clearly part of both club’s match strategy so far. And, to the naked eye, it appears to be a good one. You can argue that you have less chance of conceding when you have possession of the ball but is that always the case? More possession of the ball means you are the team about to give it away, and if you give it away in dangerous areas you are making it easier for the opponent to score.

Look at the numbers of goals conceded so far; ATK = 4. FC Goa = 4. Dehli Dynamos = 3. Are we already seeing a trend where the teams happier for their opponent to have the ball are less likely to concede?

It would depend on what the team in possession are actually doing with the ball, so see below.

Don’t forget, we like Bengaluru right now – two wins from two, less possession but making it really count with 36 shots leading to their 6 goals.

But look at ATK – good possession numbers leading to the highest amount of crosses and the second highest amount of shots on goal – all that equalling one solitary goal. Is it as simple as Robbie Keane being needed to return ASAP? Looking at ATK from purely the attacking point of view, quite possibly. The would have expected a much better return on their attacking play so far. So why is this not leading to goals?

This tells us a little more – 20 of their 30 shots have been from outside the box. What does that actually mean though? Well, without drilling down into match footage, that could mean one of two things. Firstly, that ATK are unable to get the ball into more dangerous areas meaning they are resorting to shots from distance – this could be down to their opponent being quite happy to let them have the ball in those areas, making sure that they cannot work the ball into more dangerous ones. One of two things will then happen – a failed long shot or the opponent gets the ball and counters (which we have seen so far, especially with FC Pune City). Also, I would suggest that the quality of movement up front for ATK has not been of the standard needed to create better goalscoring opportunities, something you would hope that adding in Robbie Keane would rectify.

It’s about what you do with the possession you have

There is a reason Bengaluru are the only side to have won both their opening games. It’s not about how much possession you have, it’s about what you actually do with it. Bengaluru look move the ball forwards more often than any other team in the ISL so far – why do I say that when they are second with long passes and passes into the final third? Let me explain. Sure, ATK pass the ball most often and enter the final third more than Bengaluru, but we have already learned there is less end product and they have a much higher possession % than Bengaluru. So it stands to reason that Bengaluru are using their lower possession number in a more proactive way, as they have passed the ball into the final third only 7 times fewer than ATK despite passing the ball over 120 times less than Teddy Sheringham’s men. Bengaluru have the most through balls and key passes, again for me personally key indicators of trying to be positive and proactive with the ball, rather than overly patient and waiting for the right moment.

From what I have seen over the two matchday’s so far I would say possession can be a dangerous thing in the ISL. Some people are going to say “but FC Goa are second” but really? They are second with a win and a loss, as are several of the other sides. What we have seen from Bengaluru so far is a style that seems to be working against teams believed to be defensively strong (Mumbai City) and teams that are better in attack (Dehli Dynamos). Of course, it is still far too soon to draw anything definitive, but don’t forget the season is only 18 matches long.

Bengaluru FC play FC Goa in their next match on Thursday – and I am fully prepared for my findings above to go exactly the same way as my thoughts on NorthEast United last week!