Even the longer term followers of the Hero ISL must have been a little surprised with how the results fell this last weekend. ATK, who looked very good on day one, smashed 4-1 at home. Dehli, strong in their first match, hammered by Bengaluru. NorthEast United who we might have suggested could be dark horses, not so much now after their defeat. FC Goa looked amazing when they won on their opening day, yet lost this weekend to Mumbai City FC who had been beaten in their first match. Chennaiyin who were so awful in the first half of their first match that John Gregory tore up his entire game plan for the season and started again were brilliant in their second outing. It’s easy to say that Bengaluru FC look the strongest side so far, but what is to stop ATK and NorthEast United turning their starts round on matchday 3?

#2 Rest days are going to get talked about

Although the entire blame for a 4-1 defeat cannot be laid at the door of “Bengaluru had seven days to prepare, we had only four” there is some validity to the point. We can probably all understand the need to get as many of the matches on primetime television as possible, but surely it can be done in a way that means both sides get a similar amount of rest heading into the next match? The World Cup manages to run many more matches than the ISL and they seem to manage to keep things pretty evenly spaced. But still, that is not the only reason Dehli came away victorious.

Folks, let’s get some perspective here. It has been reported in the Indian media that Teddy Sheringham’s team conceding four goals for the first time ever might be attributable to the break-up of the ATK/Atletico Madrid partnership. What a load of rubbish that is. Yes, ATK played with a Spanish style in the previous seasons and were defensively sound. But do people really think that had anything to do with Diego Simeone’s default methods in the Spanish capital? Of course not. Equally, ATK kept the ball pretty well in their first game against Kerala, although they were not really tested defensively. ATK were simply out-thought and out-played by Ranko Popovic’s side. FC Pune City pressed and forced mistakes in the ATK backline (yes, we are looking at you Tom Thorpe) and were never really threatened by ATK’s attacking game, which must now become a concern for Sheringham.

On top of Tom Thorpe handing the initiative to FC Pune City in Kolkata, Laxmikant Kattimani bungled in FC Goa’s match against Mumbai City. His clearance hit Everton Santos for Mumbai’s opening goal and then he was beaten far too easily for Thiago Santos’ winner with minutes remaining. The spotlight is very much on the Indian goalkeepers and having been named by his manager as the best in the league Kattimani has to reward his coach with some better performances from now.

Yes, we can all see they are trying to play the game “the right way”. But after two 0-0 draws, the Blasters need to do something to ignite their season otherwise it will be over before it has started. That might sound a little harsh considering only Bengaluru have won both their matches so Kerala’s two points isn’t that bad at all but the plodding pace of their performance against Jamshedpur FC does not feel like something that can suddenly move through the gears in the next few matches. Meulensteen doesn’t seem sure of where Dimitar Berbatov fits into the system, despite his claims that the Bulgarian had pulled the strings in their performance. Iain Hume might be the ISL’s record goalscorer but he will need some service if he is to register this season.

Actually, this is a rule for football in general. Delhi Dynamos director Rohan Sharma took to the social media platform to call out Bengaluru FC fans for celebrating their I-League championship wins of 2014 and 2016 likening it to “Newcastle celebrating winning the Championship”. That’s all well and good Rohan, but how do you feel now that Bengaluru have put four past you and lead the league, eh? 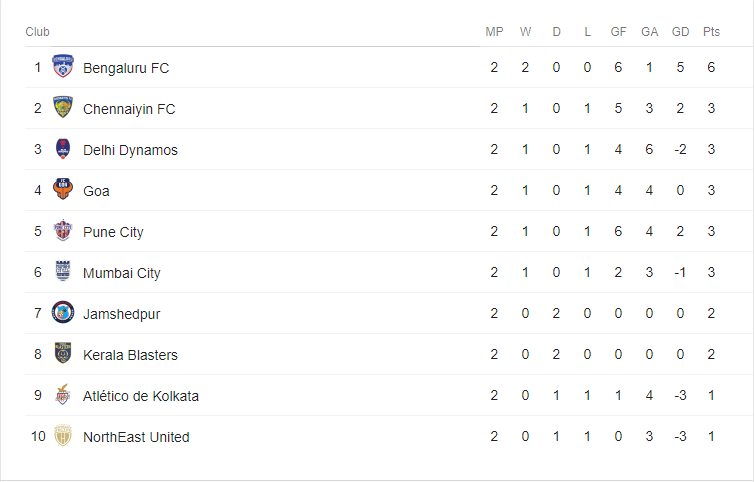