One man and one man only should be considered as the stand-out midfielder of the recent ISL campaign. I’m not here to go into my opinion on the matter, I’m here to talk stats with you about FC Goa’s Ahmed Jahouh.

He and Edu Bedia created a formidable partnership at the base of the ‘Gaurs’ midfield and I’m adamant that Sergio Lobera will be doing all he can to keep him for next season. Worryingly, Jahouh has not been included in Goa’s Super Cup squad, but we’ll put that down to Lobera giving him a break as opposed to anything more cynical.

What we’re going to do here is look at three of his passes in particular, if we looked at all of them, we’d be here until the cows come home because he made 1,625 of them! The next highest on the list weighs in with four hundred less, which goes to show how handy he was in the middle of the park for FC Goa.

Importantly, he’s nearly always on the pitch which is a good start. He featured in every game bar one and more often than not, he would play for ninety minutes, or more, as his average minutes played shows. We’ll move from right to left, so the next one is all to do with accuracy. Take a look at that. We’ll round it up to seventy-eight a game which is excellent and what makes it even better is that 86.4% of his passes find their intended target. Take a bow, Ahmed, take a bow.

Third Assists Would Be Out Of This World

In isolation, the next two aren’t all that. In comparison to the 86.4%, 62% isn’t very good, nevertheless, for more than 6/10 long passes to reach their destination, I’d still be happy with that. The less said about the through passes the better, although, it’ll be those that we look at in detail next. He sees a pass where he really shouldn’t.

His passes to the final third rank in at over 70% which is the benchmark that I look at personally, so that is good, however, his passes to box are slightly disappointing. Received passes are what they are, not much to sing and dance about there.

Ahmed’s accuracy when it comes to forward and backward passes are right on the money, backwards would always be higher due to the fact that they are not intercepted as often. That’s all the stats, here’s his heatmap as well, because pictures are all the rage in this article… 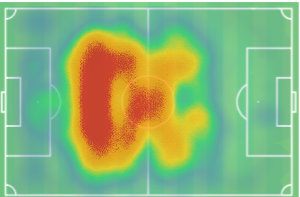 Evidently, Jahouh loves to drop deep to get the ball on both sides of the pitch and this, in turn, means Edu has more freedom to do as he pleases to a certain extent which is why they worked so well as a duo. Anyway, now let’s take a look at some examples of the magician at work… 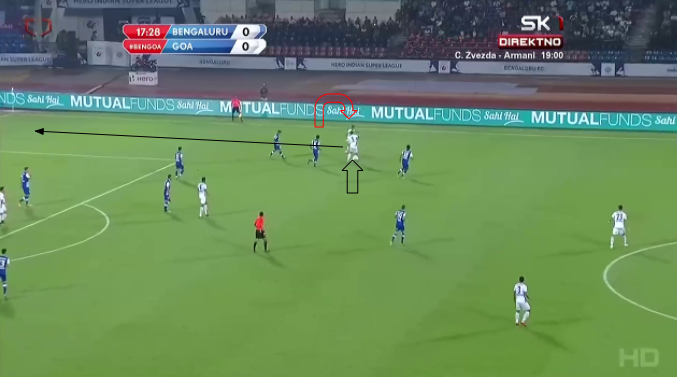 Jahouh is signified by the black arrow in this instance.

As you can see, Jahouh and a UFP (unidentified football player) are literally standing on each other’s toes, the UFP is signified by the red arrow. It is as much good work by the UFP that is by Jahouh, but the long black arrow signifies where the ball ends up and the UFP earns FC Goa a dangerous free-kick.

What was particularly impressive about this specific pass is the weight of it; if it’s hit any harder, it goes off out for a goal kick, any weaker, it’s likely the defender gets their first. Top drawer.  Let’s take a look at another… 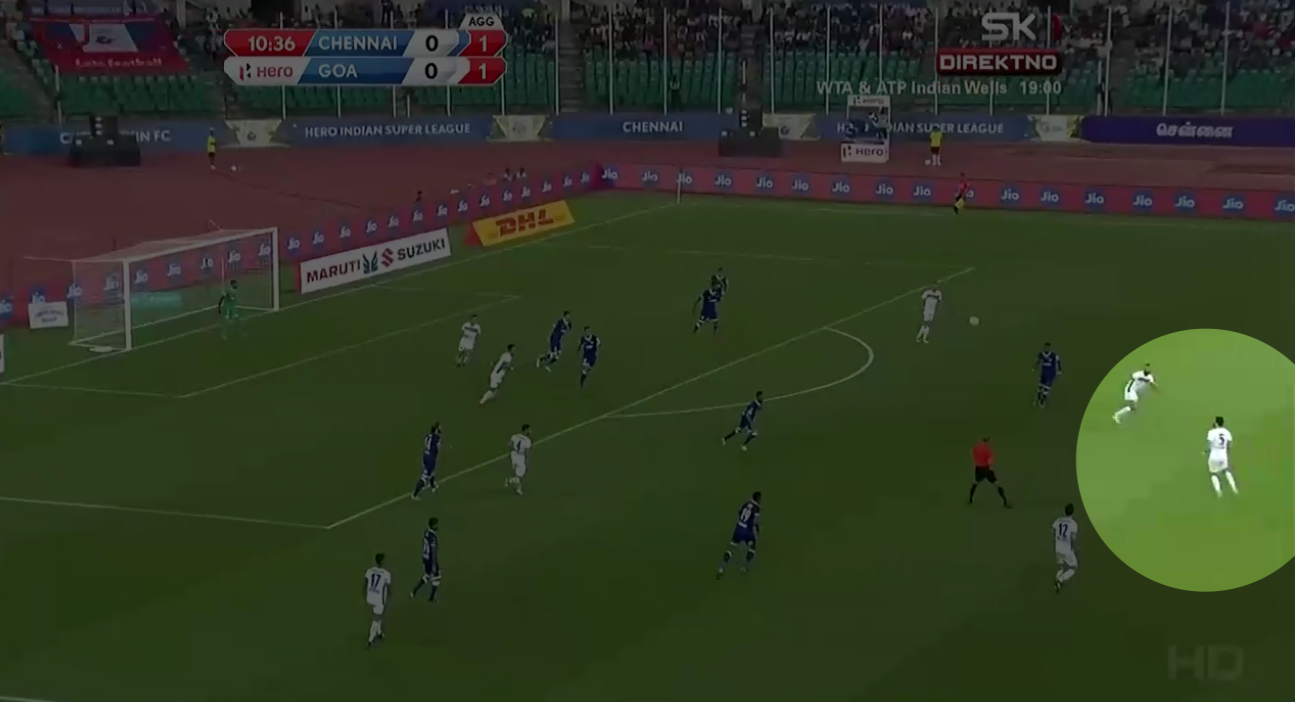 Jahouh always finds a way to make space for himself.

Do me a favour, keep an eye on the clock. 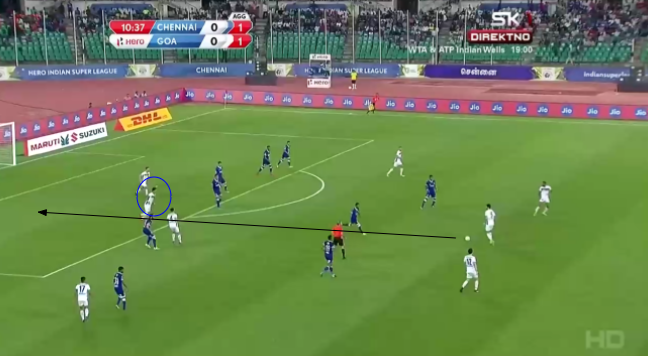 UFP with the blue circle around him is the recipient.

Within a split second, Jahouh brings the ball down and sets himself for the pass. Another second passes and the UFP has got the ball eight yards from goal. Jahouh is that good. In this instance, the keeper’s reactions thwart the UFP, nonetheless, the fact that the ball gets there in the first place is testament to Jahouh’s quality. We’ve saved the best ’til last…

Look at where Jahouh is looking on this one. Not only has he found a ridiculous amount of space, he’s looking for where the pass can go before he’s even got the ball. A sign of a wizard at work. Guess what happens next… 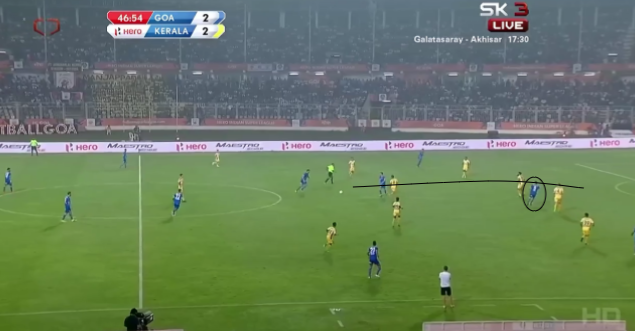 All the time in the world for Jahouh.

No UFP this time around as I know the one with the black circle around his is none other than the mercurial Coro. This was the game which saw FC Goa hit Kerala for five as they absolutely obliterated them with a sensational spell at the start of the second half and it’s no shock that Jahouh was at the heart of it.

He slides Coro in perfectly and the Spaniard faces no issues when it comes to beating the hapless Rachubka. One thing I am struggling to fathom is the amount of room that Jahouh has been afforded in the second minute of the second half, then again it was Rene Meulensteen managing them at that point.

While I may have only shown you three examples, trust me when I say there are countless more. If Ahmed Jahouh doesn’t return for next season, it will be upsetting because he has been a class above. Saying that, if Lobera stays, he will no doubt want to play a similar way next season which means he’ll need someone to replace Jahouh. Joey Barton’s ban is up shortly, maybe he fancies himself in Goa? That would be worthy of a book in itself. Joey Barton in India, I perish the thought.

Analysis-wise, this will feature more when the season has properly finished and the Super Cup is out the way as we dissect games from the seasons gone by and individual performances. Buckle up as it’ll no doubt be a bumpy ride, to begin with.

Until the next time.