Stats, glorious stats. Certain companies such as Opta are based on the whole, around stats. But what do they actually mean? Judging by what I’m about to show you, absolutely nothing as top of the table Chennaiyin appear on only one of these lists which shows that this article is potentially a waste of time, but it sure does make for some interesting reading when you consider everything that’s laid out in front of you.

Possession is nine-tenths of the law? 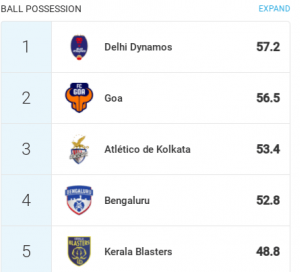 Whilst that saying may be true, possession seemingly has very little to do with anything in the grand scheme of it when it comes to football as Delhi have had most of the ball this season. Which, I can believe because whenever I’ve looked at the possession in Delhi’s games I’ve always thought that for a side that are bottom of the table, they have a lot of the ball. It is mad to think that two out of the top four aren’t in the top half of the table when it comes to possession, so much so that they have less than 50% of the ball yet are still coming away with the results that they are. Impressive. 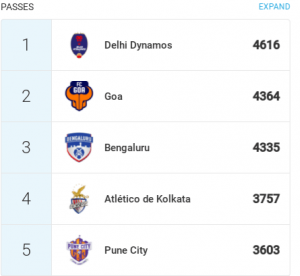 This blew my mind. Delhi have made over A THOUSAND more passes than the side at the top of the league. I was adamant it must be a glitch in the system where more Delhi games were uploaded than any other, but no, all the games are uploaded and it leaves us with this staggering stat. I genuinely can’t believe it. Quite how a team who were cut adrift at the bottom up until this weekend’s game can make so many passes but do so little with it is amazing. You see, I don’t care how pointless stats are, ones like this are brilliant. However, there are passes and then there are key passes, let’s take a look at that and see what the difference is… 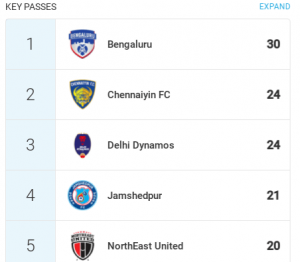 Chennaiyin join the party for this one as they show why they are top of the league as despite the fact that Chennaiyin have made over a 1,000 fewer passes than Delhi, they’ve completed the same amount of key passes, which doesn’t say a great deal about Miguel Portugal’s side. Bengaluru are out in front on this one and that’s hardly surprising as with the exception of their last game, which funnily enough was against Delhi, they’ve been brilliant going forward. 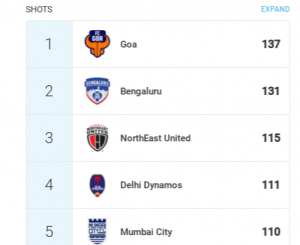 It’s not surprising to see Goa and Bengaluru out in front in terms of shots as they’re the top two goalscorers in the division (Bengaluru are joint second with Pune), Goa average a goal every sixth shot which is pretty damn impressive. NorthEast on the other hand, who have only scored a measly four goals this season which works out on average a goal every 28.75 shot which is a joke. Something that Avram Grant will be no doubt looking to rectify, whether that be through training or the transfer window, remains to be seen. 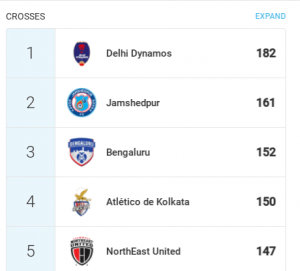 Crosses are perhaps the most interesting stat of all. The top five teams for crosses contains Bengaluru and the bottom four of the ISL which tells us a story in itself. The likes of Chennaiyin, Goa and the others are trying to play the ball into the box as opposed to crossing the ball and you have to say, judging by the league table, the lack of crosses is obviously working. Delhi have crossed the ball 21 more times than anyone else in the league, but all things considered, they have to start making their possession count.

Just to recap, Delhi have had more possession, completed more passes and put more balls into the box than anyone else in the league, yet they sit bottom and I wonder why my bets keep going to pot. Welcome to the ISL!